Qui est R.E.G. DAVIES ? Un savant américain, d'origine anglaise, professeur au LINDBERGH AEROSPACE MUSEUM, branche aéronautique du Smithsonian Institution, Washington, D.C. USA.
R.E.G (Ron, Ronald Edward George) DAVIES was born in England and, after serving for 6 1/2 years in the British Army during World War II, spent a lifetime career with, first, the Ministry of Civil Aviation, then British European Airways; later, with the Bristol and De Havilland/Hawker Siddeley aircraft manufacturing companies; and finally, with the Douglas Aircraft Company in California. His specialty was economic and market research, but he became interested in the fascinating history of the airlines and the development of the commercial airliners. Since 1964, Ron has published 12 books on the subject, with three more to come in 1997. In 1981, he took the Lindbergh Chair of Aerospace History at the Smithsonian's National Air and Space Museum and, after two years, was appointed Curator of Air Transport at the museum. Ron is a Fellow of three Royal Societies: Geographic, The Arts, and Aeronautical; a Fellow National of the Explorers Club; and an Associate of the Académie Nationale de l'Air et de l'Espace. He has received numerous awards and holds both the Merito Santos Dumont and the Merito AeronÝutico from the Brazilian government.

From the inside dustjacket: "This notable book by a leading authority on the world's airlines traces the development of the transport in all countries south of the United States, including Mexico, Central America, the Caribbean, and the whole continent of South America....In addition to 400 photos and eighty-five maps and charts, there are over thirty tables of summarised data; a special appendix providing comprehensive fleet lists of the pre-jet aircraft of eighty-four major airlines; and an excellent index.

Trippe (1899-1981) was widely respected, if not feared, for strong-arming Latin American, European and Pacific governments into granting the landing rights he wanted in the name of the United States government.

MORE (source)
Ronald Edward George Davies (born 1921) is an English specialist in airline and the air transport history, and commercial aviation economic research. Educated at Shaftesbury Grammar School, he started work in London in 1938, and was in the British Army as a territorial volunteer from 1939 to 1946. He spent a year in Iceland, training for mountain and Arctic warfare, and drove his machine-gun carrier on to the beach in Normandy in 1944. According to the New York Times, Davies made his first airplane trip in 1948.[1] Subsequently he worked for the Ministry of Civil Aviation, British European Airways, the Bristol Aeroplane Company and de Havilland before moving to the United States in 1968 to lead market research for Douglas Aircraft. A life-long aviation enthusiast, Davies dedicates his work to different aspects of the airline industry, including traffic forecasting, and specializing in its history. He researched airlines at the National Air and Space Museum as the Charles A. Lindbergh Chair in Aerospace History in 1981–1982.
Davies was responsible, alongside artist Mike Machat, for the book series An Airline and its Aircraft, which he dedicated to writing about selected airlines' histories, including the types flown. His writing led him to found Paladwr Press, which has published 38 books of classic airline histories and biographies.
Well travelled to more than a hundred countries (including all seven continents) Davies is a member of three British Royal Societies, the Explorers Club, and others in France and Brazil. He has recently retired as the Curator of Air Transport at the Smithsonian Institution's National Air and Space Museum,[2][3] and was a leading member of the Washington Airline Society. His 25th book - and swan song - Airlines of the Jet Age (for the Smithsonian Institution Scholarly Press) has just been published (July 2011).
After his long career Ron Davies has returned to England to live in his Hertfordshire home with his wife, Marjorie, and be near his two daughters and two grandsons. As well as his life-long interest in aviation, Ron enjoys traditional jazz, has written one novel, and hopes to write a book about his home town of Shaftesbury during his retirement.

Mr. Davies was the world's foremost airline industry historian. His first book, A History of The World's Airlines, was published by Oxford University Press in 1964. He wrote more than two dozen more books, including definitive histories of the US airline industry (1972), airlines of Latin America (1983) and airlines of Asia (1997).
After working for British European Airlines and several aircraft manufacturers on both sides of the Atlantic, Mr. Davies became curator of air transportation at the National Air and Space Museum in Washington, D.C. in 1983. He was a fellow of three Royal societies in Britain, Geographical, Aeronautical, and the Arts, and was a Fellow National of the Explorer's Club in New York City.
Mr. Davies' final book, Airlines of the Jet Age, was published by Smithsonian Institution Press earlier this year.
The three preeminent scholars of the airline industry in the 2nd half of the 20th century have now passed away: John Stroud, Robert J. Serling, and Mr. Davies. I was fortunate enough to talk at length with both Mr. Serling and Mr. Davies at the World Airline Historical Society convention in DFW three years ago, a memory I will always treasure.
I'm sure Bob Serling and Ron Davies are up in heaven right now, with other giants of the airline industry that are no longer with us like C.R. Smith, Don Nyrop, Peter Masefield, and Juan Trippe, sipping glasses of their favorite beverages while talking about the industry they loved so much. source 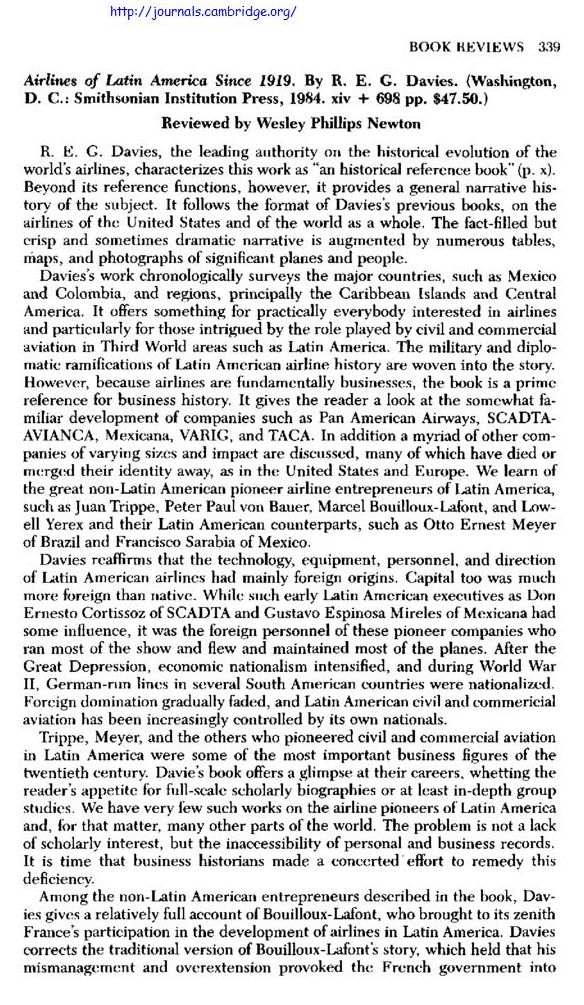 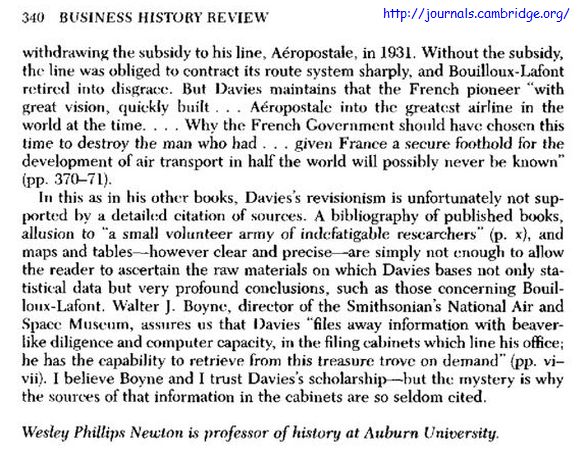